Mr. Ernest Benach, the President of the Parliament, paid a special visit to Barcelona's ancient Major Synagogue, or the Synagogue of Shlomo ben Abraham Ibn Adret, wich has recently been restored.

He was welcomed by the Association's President, Miguel Iaffa who conducted the tour of the building and explained its historic treasures. Special attention was dedicated to the huge Menorah candlestick created and gifted by the Mallorcan sculptor Ferran Aguiló. 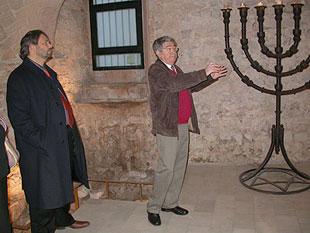 In 1996 the Association's current President Miguel Iaffa bougth the building to restore and rehabilitate it. This followed the determination of the Synagogue's exact location in 1987 by the historian Jaume Riera.

The Association was formed in 1997 to head the Synagogue's restoration project. Its members include representatives of various faiths together with local historians, all united in the objective of emphasising the role of Judaism in the development of Catalonia - and emphasising the history of its contribution down through the centuries. 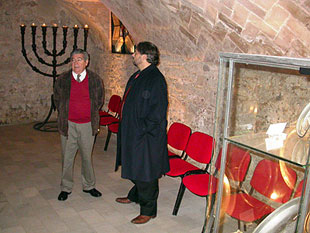